The North American B-25 Mitchell was one of the most decisive aircraft to serve during the Second World War, serving not only in every theater of war, but in the air forces of every major allied power! Although initially designed as a bombing platform for medium loads in level, daylight attacks, the B-25 proved itself incredibly adaptable. In service in limited numbers at the outbreak of war, none were present at Pearl Harbor nor Clark Field in the Philippines.

Responding to the threat of submarine attacks off either coast, they were quickly employed in anti-submarine patrol and attack missions. Lt. ?Brick? Holstrom was the first to score in this role, sinking a Japanese submarine off the Washington coast in early 1942. He and many other Mitchell pilots and crews would shortly begin training for the mission that would turn the B-25 from a bomber into a legend.

On April 18, 1942, sixteen B-25B?s, under the command of Lt.Col. James H. ?Jimmy? Doolittle, took off from the brand-new aircraft carrier Hornet (CV-8) and flew six hundred miles at treetop level to Japan, and bombed the cities of Tokyo, Yokahama, Nagoya, Kobe, and Yokosuka. Losing no planes to defense, fifteen of the planes continued on towards China, while one headed for Vladivostok in Russia. Unfortunately, gas ran short for the Doolittle Raiders, and one by one, they crashed in the sea or over the Chinese countryside. Two raiders drowned, and the remainder of two crews were captured by the Japanese. Three of the eight prisoners were executed, one was starved to death, and the other four had to survive over three years of solitary confinement under horrible conditions. The remaining fourteen crews faired much better, being helped out of harm?s way by grateful Chinese civilians, guerrillas, and army troops. The Japanese were so incensed by the aid given the American flyers that they marched additional troops into the region and killed approximately 220,000 Chinese in retaliation for the raid. Such were the Japanese at the time.

Following the successful Doolittle Raid, a number of B-25s were painted up to resemble those from the raid (of which none survived), and were used in War Bond tours by newly promoted Brigadier General Doolittle. Soon, newer model B-25s were arriving on all fronts, from North Africa to Australia, to Russian and British Lend-Lease. Although they more than earned their reputations over European skies, the B-25 legend was turned into immortalization over New Guinea. As necessity is the mother of invention, improvising mechanics and pilots of the 5th and 13th Air Forces began retrofitting conventional B-25s into a virtual aerial armory. Replacing the bombardier?s position in the nose with ten to twelve .50 caliber machine guns, plus a cannon of various size, the B-25 ?Strafers? began to rain death on Japanese troops, artillery, ships, and most importantly, the barges that kept their garrisons alive. Adding the terror of ?para-frags? (a fragmentation bomb dropped under a small parachute, enabling bombing at extremely low altitudes without endangering the attacking aircraft) only sealed their fate further.

By V-J Day in September of 1945, the B-25 had become the most common medium bomber in the allied inventory. She had served with distinction on all fronts, earning the respect of her crews, mechanics, and adversaries. Although obsolete with the invention of the jet bomber, she served in various non-combatant roles throughout the forties, fifties, and finally disappeared from the U.S. military in the sixties. Other nations continued to use B-25s for decades, but her ?Golden Age? was over. Today, there are a dozen or so B-25s kept in flyable condition throughout the United States and abroad, and can be seen dazzling the crowds at air shows.

Compiled by Andrew J. Haynes, 8/27/04. Photo below was scanned from the personal album of Capt. Maurice Langford. 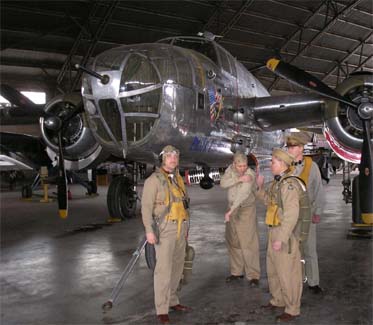