On December 7, 1941 he was loading armaments on airplanes bound for Hawaii. While on short-term loan at Oakland Airport in January 1942 he met his future wife, Leona Heaney, went out on three dates with her, and never saw her again until December 1945, after his discharge.

He requested to go to photo school, was selected, and shipped out to Fort Lowry, Colorado, followed by time in Salt Lake City, and Kearny, Nebraska. He promoted along the way to Technical Sergeant, and was next transferred to Peterson Field outside Colorado Springs to help staff, organize and train the new 28th Photo Reconnaissance Squadron.

His squadron shipped out in April 1945 for Okinawa, site of the bloodiest battle of the Pacific. Though behind the lines managing a photo reconnaissance lab near Yantan Air Base, he still had some hair-raising experiences. And, most notably, he and his crew developed the first photographs of the devastation at Nagasaki. 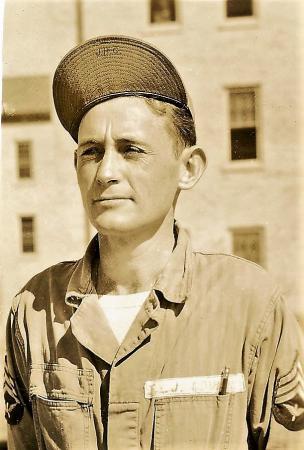